City of Bloomington and Habitat Announce Launch of Osage Place 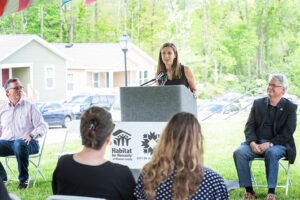 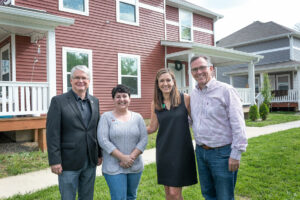 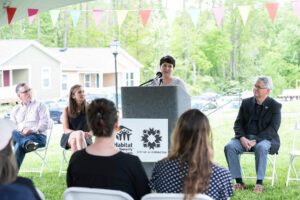 City of Bloomington and Habitat Announce Launch of Osage Place

The City of Bloomington and Habitat for Humanity of Monroe County (HFHMC), together with local private supporters, announced Wednesday, May 15 the launch of Osage Place, a new affordable housing development.  At an afternoon reception in Habitat’s Trail View neighborhood, Bloomington Mayor John Hamilton and HFHMC Chief Executive Officer Wendi Goodlett shared details about the partnership with community members.

Osage Place will be a community of around 50 homes, located on eight acres of undeveloped land on the southwest side of Bloomington, west of the intersection of Rockport and Rogers Roads.  Immediately adjacent to RCA Park (to its west) and the Broadview neighborhood (to its east), Osage Place will be located within two blocks of Switchyard Park, which is slated to open in November 2019.  Just one and a half miles from the downtown square, the new Habitat neighborhood will enjoy multimodal connectivity, via Bloomington Transit and the B-Line Trail, as well as a new trail that will extend from the B-Line at Switchyard southwest toward Wapehani Mountain Bike Park.

“This prime location will give residents a front row seat to the best of Bloomington,” the mayor remarked at Wednesday’s event, highlighting the City Parks programming and the neighborhood’s convenient location.  “Housing affordability is directly related to transportation costs,” Hamilton pointed out. “If you live a considerable commute from your place of work, what you might save in housing prices can often be lost to the cost of maintaining a vehicle, not to mention valuable time spent on the road. And dispersal of population leads to sprawl, increasing our carbon footprint and eroding our social fabric.”

Osage Place will offer homes for residents who have household earnings between 25 and 80 percent of area median income.  Habitat builds houses at reduced costs by creating partnerships with corporate and government entities, community organizations, individual volunteers, and families who invest hundreds of hours of labor into building their house and others’, and who qualify for a mortgage with an affordable payment plan.

At Wednesday’s event, Hamilton pledged the City’s commitment to Osage Place by helping fund the infrastructure improvements needed to allow home construction. Over the next two years, the City will provide 45% of the needed infrastructure costs — up to $800,000 — with local private supporters supplying the balance.

“I am grateful for the involvement and leadership of Mayor Hamilton and the City of Bloomington to support the work that we’re doing at Habitat,” Goodlett said.  “Developing our third Habitat neighborhood is vital for us to continue providing homeownership opportunities to deserving families who qualify for our program. All who support Habitat are helping to make Bloomington a place that everyone can call home.”

At Osage Place, the Habitat model will be adapted so that at least half of the homes to be built will remain affordable on a long-term basis.  If an original buyer chooses to sell the home before 20 years have elapsed, Habitat will buy back the home for sale to another household qualifying for Habitat programs. If Habitat chooses not to purchase the home, the City will retain the prerogative to do so, selling the property, in turn, to another family appropriate for the housing.

The partnership between the City and HFHMC also stipulates that 50 percent of the homes in Osage Place remain within the Habitat program at least 30 years. If that number falls short, Habitat will maintain the balance by adding another house to their program.

HFHMC’s mission is to eliminate poverty housing by building decent, affordable homes in partnership with qualifying families. Since 1988, HFHMC has built over 200 homes, housing over 700 people, including almost 400 children.

As part of its commitment to increasing safe, decent and affordable housing for its residents, the City of Bloomington has added or rehabbed more than 600 bedrooms of affordable housing over the last three years.  In addition, the City partners with nonprofit developers such as HFHMC in order to allow more opportunities for families to build stability and generational wealth through homeownership.