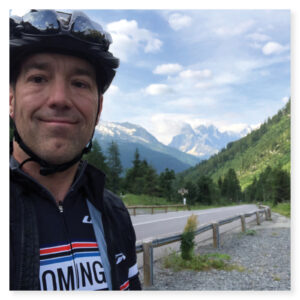 Bloomington residents and avid cyclists Blayne Roeder and Taylor Allen have been racking up some serious training miles in preparation for a local fundraising challenge to raise money for Habitat for Humanity of Monroe County (HFHMC). Roeder and Allen and plan to climb the height of Mount Everest (29,029 feet) in one bicycle ride this Saturday, August 15th. Through this feat, called Everesting, the pair hope to raise over $40,000.

The idea for Everesting for Habitat was spawned due to the COVID-19 pandemic and the impact it is having on local non-profit organizations.  The vast majority of cycling events, including several Roeder and Allen were training for, have been cancelled this year. Both cyclists still had the drive to do something to impact their local community and the mission of HFHMC resonated with them.

“Everything you read in the news has been focused on the devastation caused by COVID-19, the many healthcare workers sacrificing their wellbeing to care for patients, and the societal and financial impacts of the pandemic,” shared Roeder. “There was very little coverage of struggles of our local charitable organizations in Bloomington.”

Bloomington is known as a great place to live and also as one of the best cycling communities in the country.  Unfortunately, it is also one of the least affordable places to live in Indiana. One in five, or 22% of residents, live in poverty and a person earning minimum wage must work 100 hours every week of the year to afford a two-bedroom apartment.

“We are so grateful that Blayne and Taylor have chosen to support Habitat in such a meaningful way.” said Colleen McKenna, Director of Development for HFHMC. “Their dedication and commitment to this significant challenge will have a long-lasting impact on families in our community.”

The Everesting challenge will take between 17 to 18 hours in total and will happen at Lake Griffy on the Headly Road hill climbing south to IN State Road 45/46 Bypass. The original fundraising goal of $29,029 honored the 29,029 feet they will each climb. The pair recently set a new goal to raise $40,290.29 in order to fund half of the construction costs of a typical Habitat home in Monroe County.  “The new goal helps us understand the impact we are having to the community,” said Roeder. “It costs Habitat $80,000 to build a house.  If we meet our new goal, we will help build half a new house for a family in need.”

“The response from friends, local businesses, and the community has been amazing,” said Roeder. “We committed to raising $40,000 for Habitat and we’re making great progress toward that goal.” said Roeder.  More details including ways to support this initiative can be found at: https://give.classy.org/Blayne-Roeder-Everesting.

Blayne Roeder, his wife Becky, and children (David and Gwen) moved to Bloomington in 2012.  He works for Cook Medical and has actively ridden and raced bicycles since 2003.  His accomplishments on a bike include several Indiana State Championship medals including wins in his age group in the time trial in 2017 and 2018, completing a 100-mile Gran Fondo in under 4 hours, and completing a virtual Everesting on Zwift. You can follow Blayne on Strava (https://www.strava.com/athletes/10749370).

Taylor Allen, moved to Bloomington in 2016 after graduating from University of Evansville. He works for NSWC Crane as an Engineer and began cycling actively in 2012 by competing in University of Evansville’s Big 39 Bike Race. His accomplishments on a bike include winning the Big 39 Bike Race three years in a row and competing in cycling race events all over the United States including top 3 finish in his age group in the Assault on Mt. Mitchell, the MidSouth, and the Triple Bypass. You can follow Taylor on Strava (https://www.strava.com/athletes/22922668)