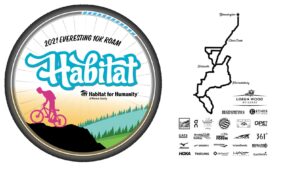 On September 18 and 19, a group of Bloomington residents and local cyclists will be Everesting for Habitat – AGAIN.

In 2020, avid cyclists Blayne Roeder and Taylor Allen recognized the impact the pandemic was having on local nonprofit organizations and decided to act. The two came together to raise awareness and funds in support of Habitat for Humanity of Monroe County by climbing the height of Mount Everest – 29,029 feet – in one bicycle ride on South Griffy. Eighteen hours and 142 miles later, the pair had reached their fundraising goal of $29,029 (one dollar for every foot climbed), but they didn’t stop there.

Joined by Jesse Smith, the group raised their goal to $40,290.29 – about half of the cost to build a Habitat home in Monroe County – and took to the pavement for another Everest, this time on Boltinghouse Road.

The three then recruited fellow cyclists Patrick and Sean for a third Everest on the gravel road of McGowan (a 20% gradient climb!) in October 2020.

And now, the group is back and they’ve raised the bar again. Not only did the group set their fundraising goal to the equivalent of TWO Mount Everests ($58,058), but they plan to ride around Bloomington and the surrounding area until they climb 10,000 meters (32,804 feet) each in less than 36 hours! This is called an Everesting Roam 10K.

Please join us in thanking riders and advocates Blayne Roeder, Tom BonDurant, Taylor Allen, Jesse Smith for taking on this challenge in support of affordable housing here in Monroe County!

You can help them climb their mountain today by making a gift in support of their cause – https://www.classy.org/campaign/everesting-for-habitat-2021/c339080