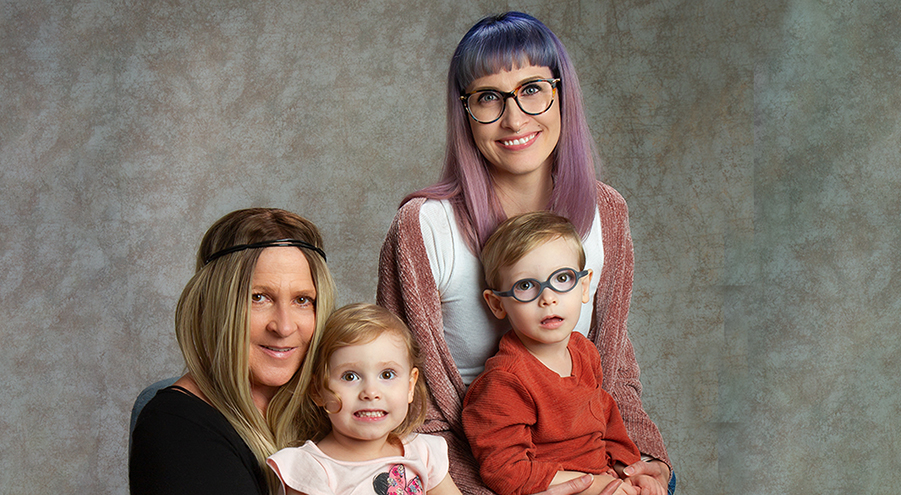 “I never imagined owning my own home, and now I get to help build it. I think that is a really great experience that many people don’t get to have.”

Shawna Thompson, an IU alumna, currently works for Urban Outfitters in Bloomington. She recently moved back to the area with her four-year-old twins, Madeleine and Theodore, and her mother, Donna Dalton.

Donna came to stay with her daughter after entering into cancer remission. She is now able to serve as the twins’ caregiver while Shawna balances a busy schedule of work and appointments for Theodore. He was born with lissencephaly, a rare brain disorder where the whole or parts of the brain appear smooth, that affects Theodore’s abilities. He requires the use of a communication device and frequent speech and physical therapy appointments.

“Raising my children has been a difficult road, but it has also been one of the best and most fulfilling experiences. I am glad my mom is able to help.” Shawna says she wishes she could give her mom her own home, but she is also happy to have her nearby.

Shawna applied to the Habitat program on a whim, after hearing about the organization in passing. She did her own research and called the office for more information. She attended the next Homeowner Information Meeting and was sold. She applied and was accepted into the program in December of 2017. Now just 15 months later, she is preparing for construction to begin on her Trail View home.

“I was embraced with warmth and encouragement since the beginning. Even with a few setbacks, there has always been someone there to help us move forward,” Shawna said, pointing to when she decided to retake the Money Management courses after a battle with pneumonia and bronchitis. “It doesn’t matter what your beliefs are or background is; you are welcome here.”

The whole family is excited to begin construction, and to move out of their overcrowded condo. “There isn’t enough space for the twins to run around or use their toys to their full capacity,” said Shawna. “My daughter Madeleine’s excitement to have her own room is contagious!” The entire family is also looking forward to living so close to the B-Line Trail as both kids like to ride their bikes and be outdoors.

Shawna has earned many of her sweat equity hours at the ReStore and through office projects. Now, she is ready to meet all of the volunteers who will be working alongside her through the construction process.

“It’s difficult to put into words – the gratitude. The immeasurable impact of these people helping us; people they don’t even know. We are very appreciative of the people who are willing to do that.”